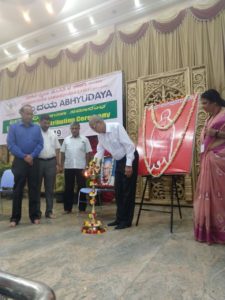 Shri P Ramadas, Managing Director of Ace Manufacturing Systems Ltd, Bengaluru  was the Chief Guest to this program. Shri Narahari, General Manager of Suprajit Industries, Bengaluru has presided the function. More than 300 children and their parents attended this function.

Shri Ramdas was one of the people in the country who started Computer based design. He started the factory in small shed today it is in 20 acres plots, they manufacture more than few thousand machines 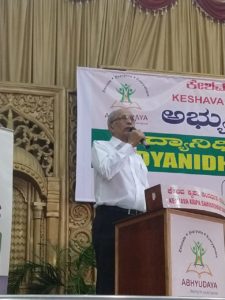 every year and till now they have manufactured more than 35,000 machines. More than few lakh people have got the guidance for their livelihood by Shri Ramdas because of his CNC machines. He has saved several thousand of crore foreign exchange to the nation by Make in India in field of CNC machines. If Such entrepreneurs, industrialist become role models to children, this nation can transform much faster. Shri Ramadas spoke about importance of achievement, determination, education etc. He also told that he will try his best to support Abhyudaya and its mission. He asked the students to never give up. 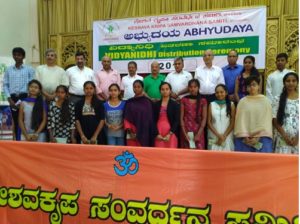 Shri Manjunath gave example of a girl whose mother was a house maid, whose in laws were also very poor , father in law used to do labour job in city market, entire family was uneducated. She studies hard in evening college, did her B.Com and then did ICWAI and today she is in a Top IT company. Similarly, he gave an example of newspaper boy Satish. He shared several examples of how many people are now leading a better lives by hard work and with committed support from Abhyudaya. 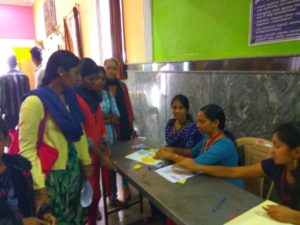 Later Shri Manjunath also told about the journey of Abhyudaya from 12 children in 2004 to 3,600 children in 2019. Abhyudaya teaches, culture and moral values along with education.

From last few months Abhyudaya volunteers have visited more than a hundred houses located in very low income group areas to do background verification, to check if the applicants for Vidyanidhi scholarship are really needy and to verify their economic status.

The program was started after remembering the great person Shri Nagabushan a great philanthropist who passed away last month, he had donated the land on which Abhyudaya, Konanakunte building stands . A great inspiration for many.

Vidyanidhi 2019 – an event to support education with financial assistance