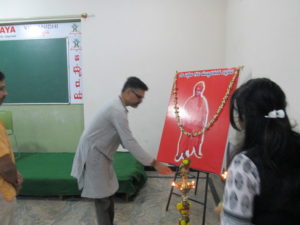 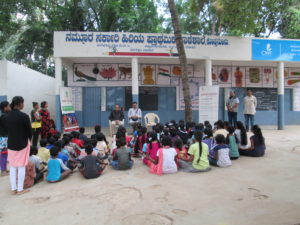 Shri Prafulla has interacted with the children from socially deprived background. In Jnanagiri, he had a Samvada or an interaction with public of over 100 people on the topic of sewa and role of media in developing the society. 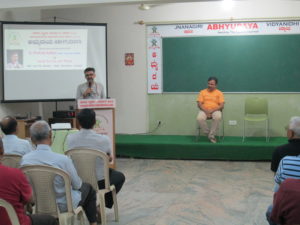 According to Shri. Ketkarji, the Indian mind does not accept law imposed on them, they accept what comes through society as part of consciousness. Mr. Ketkarji also asked people not to depend too much on the government but change can happen when people together find the solution and work for it collectively. He also emphasized the Indian (Bharatiya) problems can be solved by Bharatiya people and not by a foreign NGOs, as long as our local languages are not ignored our country will not have problems. 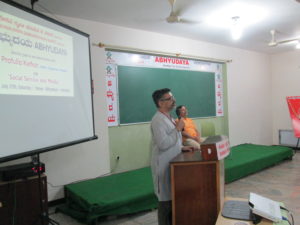 Ketkar ji explained the key contribution to world – by Americans Economic Democracy, by Europe Political/Voting Democracy and by Bharat Spiritual Democracy. In Spiritual Democracy, India practiced and shown to the world how can any person be free to follow their religion, worship any god or even being atheist and not worship any god or create their own god. Bharat tradition is beyond tolerance, we accept each and every person with respecting all god. He cautioned that Media is distorting entertainment and breaking families, through its serials,  we have to address these problems.

Abhyudaya is a project of Keshava Kripa Samvardhana Samiti, the free Kalika Kendras are run daily for two hours in several parts of Bangalore in lower income group areas. The centers are run by many swayamsevaks. Organiser is an oldest nationalist weekly magazine of Bharat, once upon a time Shri LK Advani was its editor. Shri Prashant Vaidyaraj Southern bureau chief of organizer coordinated the program.  Shri Manjunath from Abhyudaya Advisory board presided the program. Shri Raghotham Research director at The Mythic Society, Bengaluru was also in the program.
Shri Lakshminarayana and Shri Vidyashankar from Abhyudaya gave introduction about Abhyudaya.  Many students who are civil service aspirants, studying Master of social work and studying Journalism attended the program.  The program was also supported by MSW colleges, Journalism colleges and UPSC coaching institutes by informing their students to attend in large number.
Shri Prafulla was impressed by the social work of swayamsewaks of Bengaluru for socially deprived children 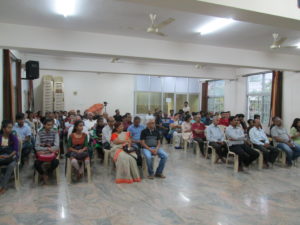 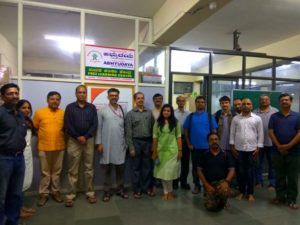 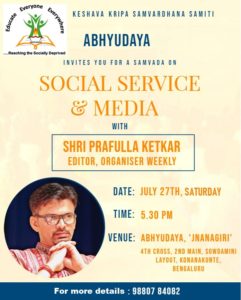