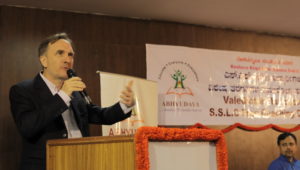 Sri François Gautier Consul General of France was the Chief Guest at Abhyudaya Bengaluru Valedictory function of Free classes for deprived children. Around 200 socially and economically deprived children and their parents attended the program. 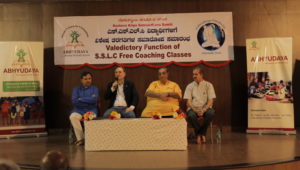 The consul general appreciated Abhyudaya for giving back to the society.  He mentioned that he is in India since 3 years and it is an impressive and huge country. India has a huge population of youth and India is a very big player in the world. India is a growing county where everyone has a chance and everyone has a place. He admires people who being in a job and having a family, take time out to serve the society. He mentioned that education is the key, his job today is because of his education his parents and teachers have given him and he is grateful to them. 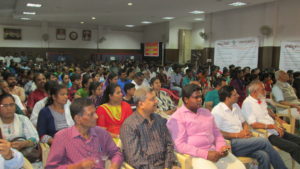 In society some of us are privileged and some are less privileged. We have to help each other and we all are part of the same world community. He wished the students to try to achieve their dreams. He mentioned that the future of the children is the future of the nation and that affects the future of the whole world. He asked the children to give back to the society when the grow up and get into good jobs. He asked the children to make the world a better place. Later he interacted with few children and explained them about educational opportunities in France. He mentioned that French is not an easy language but since Indians have the practice of speaking several languages they will not find it difficult to learn French. 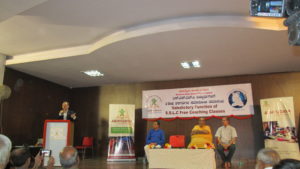 The program was started after paying respect to the CRPF soldier who lost their life in the recent Pulwama terrorist  attack. 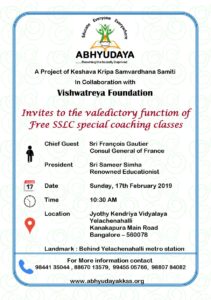 Dr KS Sameer Simha educationalist asked the students to be patriotic for the country and serve the country. He also spoke about the Abhydhayans who are leading their life with utmost success in various fields and concluded his speech.

Dr Raghottam member of Advisory board of Abhyudaya was also present during the program. Mr Manjunath gave the vote of thanks. The program took place of 17-02-2019.